SpongeBob is guilty.... along with other shows 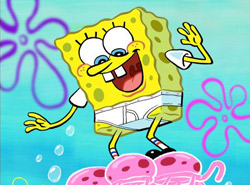 SpongeBob has become a victim of the "protect-our-children" movement.

A study performed on kids measured their problem solving abilities after watching SpongeBob, Caillou (an apparently "calm" show said the researchers), and colouring.

The kids who watched SpongeBob performed significantly worse compared to the other to categories.

Of course colouring will produce the better outcome.  What I can't understand is why Caillou was used.  Yes, I understand it is calmer in the sense that the screen isn't bouncing around.  However, the quality, while at times education, promotes whining to get stuff.

I admit SpongeBob is banned in our house, as well as Rugrats, Alex, and Caillou. For reasons Angeline Lillard, the lead researcher said, it isn't just about how much TV children watch, it is the quality.

Be aware of what you are putting on in front of your kids.
at September 20, 2011