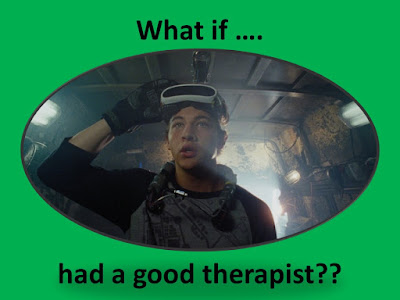 Wade Watts is one of the heroes in the book and upcoming movie Ready Player One. Spoilers are ahead. The movie may change the background of the Wade, so this assessment is purely based on the book by Ernest Cline.

What Happened (Spoilers!)
Wade is the only child of his teenage parents. Both his parents were refugees to the United States of America. When Wade was a couple of months old, his dad was shot and killed while searching a grocery store during a power outage. Loretta, Wade's mom, raised him alone while working two jobs. Wade was babysat by the virtual world, OASIS; this is where Wade learned his life skills.

At age 11, Wade would find his mother dead from an overdose. He then lived with his aunt Alice who only wanted Wade for the food vouchers. She had abusive boyfriends and tenants in her double wide trailer. He slept in the laundry room, the only free space from everyone in the trailer. However he spent most of his time in his secret hideout in an abandoned vehicle.

Wade went to school in the OASIS. He excelled academically, but spent most of his time researching James Halliday, the creator of the OASIS, and the quest for the easter egg that Halliday left in the OASIS after he died.

Around the age of 18, just prior to graduating high school, Wade was the first to uncover the first clue in the hunt for Halliday's egg. This led to him forming close ties with the "high-five", five egg-hunters: Atr3mis, Aech, Shoto and Daito. Wade was known online as ParZival. Wade also became a main threat to a corporation seeking to win the hunt.

Discussion about ACE's
Wade has an ACE's score of 6. With each additional adverse experience so does the likelyhood of health problems in adulthood. In a recent study, male's who experienced six or more ACE's were more than 46 times more likely to an injection drug user.

As we will discuss later, ACE's are not a life-sentence. There are also protective factors that we will look at.

Wade says many times himself that he is a depressed shut-in. That may be the best description of his mental state.

He is struggling with his sleep patterns, lost interest in some of his social connections. He had a plan for suicide.  He also had to order new suits because of his weight gain. All indicators of depression

Anxiety is often concurrent with Depression. It becomes difficult to figure out which one is "driving the bus." Is anxiety present because of how depressed someone is, or is depression present because of the anxieties? He does report some anxieties, such as racing thoughts.

While it may be understandable that he is suffering traits of acute traumatic stress disorder, given threats to his life, but he doesn't report flashbacks or other symptoms.

A depressive disorder is the best fit.

Positive Psychology (PERMA)
Post Traumatic Stress vs Post Traumatic Growth
So where is ParZival at? Is he stressed or is he growing. The answer is definitely yes to both. He is currently stressed with the crisis he is in, so since the stress is present, we can't really say he is experiencing 'post' traumatic stress. This is where, despite everything that is and has happened, Wade is experiencing post traumatic growth. As outlined in meaning, self-esteem is on the rise as each component (self-concept, self-efficacy, and self-worth) came to have more meaning. He found online friendships within the high-five. As he began fighting his depression with PTG, we were able to see him increase in mental processing and planning.

Interventions
It's important to realize we are just going to stick with interventions at the individual level, not at any of the systems: family, community, societal; which all could use an intervention or two as well.

With a young Wade, he could have benefited from human baby-sitting to help him learn how to navigate in the real world. There is safety and comfort that comes from nurturing human contact that allows the brain to grow healthily.

Grief support. Losing anyone is hard, especially a parent, not to mention both. Grief is a natural reaction to an unnatural event and doesn't always need a therapeutic intervention. But due to his new living situation, being without either biological parent, extra support would be beneficial as he transitioned.

Exercise. This was something that Wade became aware of himself during the story. Exercise is an excellent combatant of depression. It doesn't need to be marathon running, but simple walks or lifting weights. An extra bonus, exercising with someone.

Healthy eating. The only food that Wade cooked was microwave brownies. Nutrition is an important component to mental health and well-being.

Trauma therapy. Being an EMDR trained clinician, I'd recommend that mode. But any trauma informed therapy would be beneficial to Wade when he is ready to deal with his ACE's and then his experiences finding the easter egg. The narrative he did of his experiences is a great start to healing.

To finish, here is a clip that summarizes everything we have discussed about depression including interventions, called the Black Dog.

Closing Thoughts
Wade, definitely would benefit from therapy. However, timing is the important piece here. Therapy is needed when Wade is ready. When someone is in crisis, therapy for historical events is not appropriate, the crisis needs to be dealt with first.

The difficult piece with therapy with teenagers is that their past, present, and future is at stake. If the present counselling was forced and Wade perceived it was a waste, he then would not seek out therapy when he is 25, 35, or 75.
at March 23, 2018